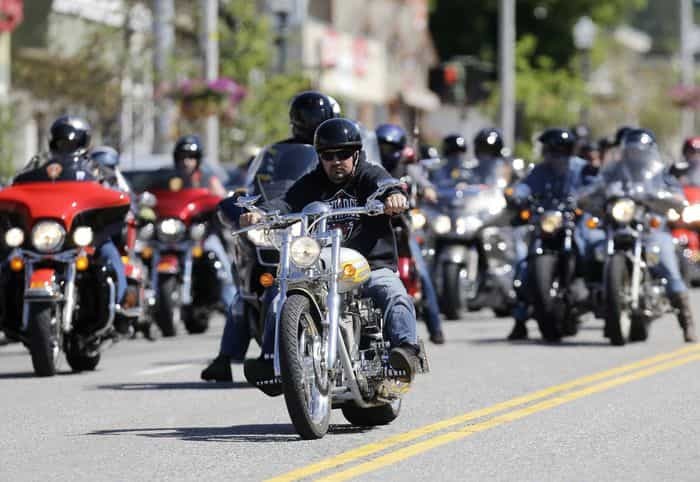 The first "cade" rally on the east coast was in May of 1983. Veteran motorcyclist Bill Dutcher, along with a very small staff, hosted "Aspencade East " in Lake George, NY. The event's headquarters were at Roaring Brook Ranch, where much of the rallies activities still take place. In 1986, the name was changed to "Americade" to better suit the "multi-brand" motorcycle event that it had become.

What the weather was like during "Americade" in the past

The location of "Americade" makes it nearly impossible to accurately predict the weather for the entire week. Sometimes a storm will get caught in the mountains and it will rain for days.

Other times you'll see the rain clouds in the distance but they never get to town and the sun will shine on your parade. Keep that in mind if you decide to take one of the scenic tours. The weather can be quite different only a few miles away.

Some Great Things About "Americade"

There are quite a few reasons that I pack up the trike and have Faith get our clothes together along with other essentials to load the trailer for our "Americade" trip each year. I guess the first is that I can usually ride up there in half a day.

We've been to rallies that take anywhere from one day to some that we fly to and rent a motorcycle. I love being able to wake up, have some breakfast, get on the road and grab a late lunch at King Neptune's in downtown Lake George.

An outside table overlooking the lake and a great sandwich is a fine way to start off the week. That's King Neptune's in the picture. The red umbrellas are the outside tables. Picture was taken during the cruise we took on the lake.

I know it's a motorcycle rally but sometimes I like to park the trike and not see it for the rest of the day (and night). After breakfast you can take a nice stroll down Canada Street to check out the shops or to watch the bikes cruising the street or just sit and "people watch".

There are more fabulous restaurants and bars and gift shops than you could check out in a day so take your time and enjoy. Also, as evening rolls around and you've had a nice dinner, you might want to sample some of the rally nightlife.

You'll find music playing in a number of places along the street and it's nice to know you can walk back to your room if you care to enjoy some adult beverages...There are a few places to sit and have a drink or two while getting a great view some awesome bikes as they cruise the strip.

And then there's the TourExpo. Although you do have to pay to get into the vendor area, it's one of the best !! If you're looking for something specific for your motorcycle or just happen to be browsing, chances are you'll be leaving with something new.

The vendors range from super-sized tents with big name products to smaller clothing and trinket booths. They have tents set up for tire changes, oil changes and other maintenance. If you need it, you can probably find it here.

One little helpful hint.....on the day that you plan to check out the EXPO, don't have a big breakfast !! The food vendor area is huge and ya gotta come hungry !! Around lunch time it gets very crowded and it might take a while to get a seat but while you're waiting you can stroll around and try to figure out what you're going to eat.

NOT an easy choice !!!! If only there was a way to buy a sample from every food booth. But whatever you decide, it's for sure you'll enjoy your lunch and after you've eaten another walk around the area might make you feel a little better.

After checking the weather to find the best touring day, it's time to get back on the motorcycle and treat yourself to some awesome scenery and long, winding rides through the beautiful Adirondacks.

One great ride from the Village of Lake George is to Lake Placid. Lake Placid is best known as the two-time site of the Winter Olympics, in 1932 and 1980. It was here that the 1980 USA-USSR hockey game the Miracle on Ice was played, when a group of American college students and amateurs upset the heavily favored Soviet national ice hockey team 4-3 and two days later won the gold medal.

The victory is often ranked as the greatest in American sports history. It is also the site of the Olympic Oval, where Eric Heiden won his five Olympic gold medals. It's about 85 miles (an hour and a half ride from the Village) and it has some nice backroads riding.

Another Day Trip Worth Doing While Attending Americade

The summit offers a 360-degree view of the Adirondacks and maybe on a clear day you can get a glimpse of Vermont and even Canada. The skyscrapers of Montreal, 80 miles away, can be seen on a very clear day.

At the summit is Whiteface Castle. The Castle was built with granite excavated during the road construction. From the parking lot there are two routes to the summit. The first is the Stairway Ridge Trail, a footpath with handrails and intermittent cement and stone steps approximately 0.2 mile long. The second is a 424-foot long tunnel into the core of the mountain.

At the end of the tunnel is an elevator, which rises 276 feet ( approximately 27 stories) to the summit. What a fantastic way to spend your day !!

A shorter ride from the Village might be to Saratoga Race Track. About 30 miles away in the town of Saratoga Springs is the famous horse track. Whether the track is the reason for your visit or you just want to spend some time in a wonderfully quaint town, take the ride to Saratoga Springs and enjoy your day.

A Bit Of Troubling News

Prior to the Americade event in 2010, the New York State Department of Environmental Conservation informed the organizers of Americade it would increase the fee it charges the event to occupy the parking lot behind the Million Dollar Beach from $52,000 to $90,312.

This prompted the organizers of the event to begin courting other locations, including some in Vermont. This is not only depressing news for the thousands who have returned to Lake George year after year for this event but also for the town of Lake George and it's businesses.

The "Americade" rally was a major event during the summer and all of the merchants form the gift shops to the bars to the fine restaurants will feel the effects if they never see "Americade" again.

2009 figures again showed that Americade Week was the biggest week of business for much of the Lake George Region resort community, and the biggest single boost to the local economy.