How Much Does a Harley Weigh? 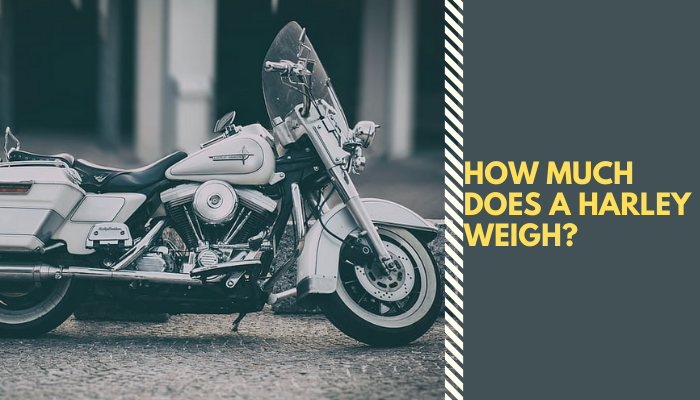 Harley Davidson is not only one of the most popular motorcycle brands out there, but it is also a great one. By getting one of their two-wheelers, be sure that it will last longer and show the perfect qualities you want.

But one thing that comes to many of our minds is the weight of Harley motorcycles. It is actually an important factor to account for as you are buying one. You should also be aware of the weight limit it can load.

Keep in mind that different Harley motorcycles may have different weights based on their sizes and other factors. In this article, we will try to show you how much various motorcycles from Harley weigh. Additionally, we also added some necessary information that can help you care for your vehicle.

What Determines the Weight of a Motorcycle?

In an initial sense, the main factor to affect a bike’s weight is its size. Bigger will weigh much, while smaller will weigh less. Remember that Harley Davidson weights much than your average motorcycle. So, some models may exceed the traditional 300-500 pounds weight range of a bike.

While riding a bike, some additional stuff will increase its weight too. Things like extra components, fuel weight, and the load it is carrying will work here. But we will only add the base weight of the bikes here.

The Weights of Harley Motorcycles

Before we get onto the weight list, let me introduce you to the term dry weight. Dry weight indicates the base weight of a motorcycle, which is without the weight of fuel, components, or literally all extra things.

With that in mind, we should also say that the dry weight is normally within 59 to 60 lbs. than what it will weigh in the end. So, keep that in mind before loading your vehicle.

Here is a list of weights (lbs.) of Harley Davidson Sportster bikes-

We should also remind you that Harley Davidson has lots of models in its inventory. We are adding some of the popular ones here. With that being said, let’s move onto some bikes manufactured by Harley Davidson within 600 to 800 lbs.

Now, we will cover some Harley Davidson with weights that exceed 800 lbs. They may appear bigger and have a higher wet weight too.

If you look at the weight lists that we mentioned above, you will notice that most bikes within the same models weigh around the same. So, the weight of a Harley bike can depend on its model for the most part.

One can also find that there are some models that weigh higher than other certain ones. For example, most Harley Cruiser bikes have a middleweight. They are heavier than Sportster but lighter than Touring models.

Meanwhile, the Touring ones mostly have the highest weights among all other Harley models. They range from 650 to even 1000 lbs. The Sportster is one of the lightest models in Harley.

Some of the really older Harley motorcycles may also be as light as the Sportster ones. But one thing is for certain- on average, Harley bikes are heavier than many other brands out there.

Weight matters a lot, depending on the purpose of buying the bike. For instance, a sportbike should be lighter than a bagger or other models. Otherwise, they don’t perform well. On the other hand, Cruiser bikes will have a higher weight, and they shouldn’t be so light.

There are common beliefs that lighter motorcycles perform better and are more comfortable. However, the Touring model totally debunks that. They are one of the heaviest yet most comfortable bikes worldwide that can perform excellently on long journeys. For beginners, we will recommend getting a lighter one as they are easy to control.